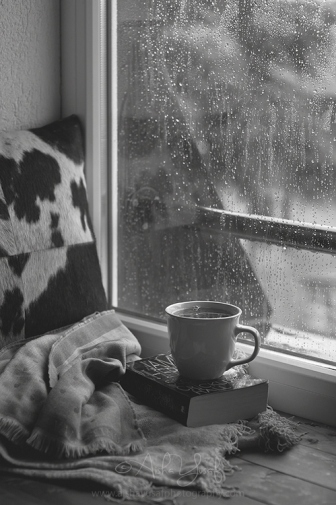 You know the thing that suffocates you till you can’t breathe anymore? That’s a wish. And then that dark shadow that occupies your mind and shuts off the light of your eyes just before making you unconscious? That’s despair. And then a sudden air that forces it’s way up your nose and mouth and pumps your heart very hard and makes you feel alive again? That’s hope.

It is raining outside. Whenever it rains, my heart talks nonsense just like that.

I don’t hate rains like other people do here (By here I mean, here, In the city where I live now. where weather is cold almost throughout the year).

Rain is still like a mystery to me. I haven’t experienced getting wet in it with hands stretched in the air and face towards the sky. I don’t know what it feels like to sit on the stairs in front of my home with a mug of coffee in hands and staring at the rain drops pouring on the ground beside me. I don’t know the warmth of hugging someone special while standing in the rain showers. I’d also like to scream and laugh out loud in the streets though there might be a risk of being caught in this.

All I have seen of rain is from my window glass, while reading a book or staring outside purposelessly. Sad, Quiet.I want to know it more but I am scared. I am scared that if I’d know and experience everything about rain that’s mystery to me now, what will I do then? There would be nothing left to wonder about. It will all be over.

I know that’s absurd. I am being strangely honest. I am so scared of taking one step further and I don’t know when this habit took control of me. I can just think and think for hours of getting out of my comfort zone but I have no courage to step out practically. I am not brave enough.

May be I am still circling around into the darkness of despair or may be, I am breathing that fresh air of hope but I haven’t realized it’s there.

“I’ve spent years chasing the tail of my darkness; the same darkness that has once again blurred my vision”, Harry thought, as he lay the phone in its cradle. He’d been expecting this news in quite the same way you expect winter to follow autumn. But just as you can never prepare yourself for bone-chilling winds, you can never prepare your heart for the loss. Poor Ron. His voice had been shaking as he gave Harry the news that Hermione was gone.

Harry cupped his mug of coffee in both hands and sunk into the chair trying to distract his thoughts.The warmth of coffee mug seeped into his fingers as he clutched it and gazed at the deep brown liquid. He wished Ginny had made this coffee. She always had a way of choosing just the right amount of ground coffee beans to use. Since Ginny died after thirty years of passing out from Hogwarts, he never had been to that coffee shop they used to visit together. The coffee shop smelled of musk with a hint of cinnamon that was too close to Ginny’s essence.

He squinted out the window and caught a glimpse of the sun.  He felt a vague sense of whiplash witnessing a sunny day knowing that the earth travels at thirty kilometers per second in its daily trek around the sun and spins zero point five kilometers around its own axis. He remembered Ginny teasing him with all those magic spells when he would spout the mathematical trivia.

Shifting in his chair, he tried to focus his eyes on  Paul Cézanne’s painting ‘The Card Players’ that Ginny had hung on the wall of their lounge three years ago.  The painting looked like it was drowning as his tears welled.  His mind kept straying back to Ron’s call.

Hermione. Her presence on the planet had always been enough for him; it didn’t matter that they weren’t together. They spent her birthdays together every year and he had fulfilled her every wish silently in the form of birthday gifts. Six years in Hogwarts and six birthdays, one year for every day it takes the moon to orbit the earth with a speed of 3680 km/hr.

He recalled one of her birthdays when he took her to The Wonderland following the footsteps of Alice. He had allowed himself to swim, just for a few minutes, in the depths of her azure eyes making a straight angle of 180 degrees that day. They wandered there all day meeting the king and queen of hearts, Mother bird, Mary Ann and white rabbit, all her favorite characters and they celebrated her birthday with special lavender truffles that were made of rich dark chocolate infused with lavender and cardamom and some flavors of hot chocolate.

Even though she only glanced over her shoulder when he took her back to Hogwarts, he waited. And hoped, like the forever unknown ‘x’.  But two months later, Hermione and Ron announced their engagement and Harry knew he waited in vain.  He mustered his strength to achieve an escape velocity. With time as he settled into his new trajectory around Ginny, he felt Hermione’s gravitational pull for long.

But now Hermione had succumbed to the cancer that had been wreaking havoc on her for five years. Memories:  that’s all he would have of her now.  Maybe that’s all he ever had.

He pushed his chair away from the table and decided to get ready. He had to meet Miss J. K Rowling to make a quick apology and he was sure that she’d forgive him.

Note: The characters Harry, Ron and Hermione are JUST characters. I took these names because their background history was already clear to you. You can take them as characters of Harry Potter OR some other people who studied in Hogwarts, choice is your’s but please don’t read this story as a continuity to the Harry Potter stories.

This is my 598 words response to the Speakeasy weekly writing prompt, which is to write a piece in 750 or less words  (1) using “I have spent years chasing the tail of my darkness.” as the first sentence, and (2) make some reference to the art prompt, The Card Players, one of a series of paintings by Paul Cézanne.

The challenge is open to anyone, so if you’re inspired, click the badge below to check out the challenge details!